A beautiful morning setting, with soft winds and warm sunlight. YC was seated by the bay, looking at the yachts. Joggers were with their dogs, passer-bys were shooting self-portraits with the wonderful backdrop.

YC took the afternoon off for his proposal. He planned for a lunch date with his love at a fine restaurant by the Marina, Privè. His excuse? A free lunch dining voucher from a kind friend. We often spotted him seated at his table, SMS-ing his wife-to-be about their lunch date later and settling some work in-between. There were moments where you saw him looking out of the window, deep in thought, looking at the engagement ring and mentally running through the biggest event of his life thus far an hour later. This private moment was definitely much needed.

From our side, things were especially hectic in the final hour before the proposal. We were working with the balloons vendor for the BIG (each about 1metre tall!) balloons, ready to spring out during the final moment. We briefed restaurant managers and guest servers on the big plan, and also positioned the hidden cameras. We had excitement coursing through us.

1145 am: Time for him to leave and fetch his love! He says he would be back in half an hour

1150 am: While waiting, we did a last “technical” rehearsal on how the balloons will float out dramatically and beautifully to surprise the beautiful lady during the final moment.

1220 pm: People on the ground were getting worried. Still no signs of YC nor news that they would be late. (As proposal planners, by virtue, we are always there to control and coordinate things on the ground should there be changes to timing or plan. So you can imagine how worried we were.) Luckily, he managed to notify us that he deliberately lost his way to give us some extra boost of time. We were actually all set to go by then.

1230 pm: They arrived! Time to get the proposal rolling!

They were seated at a beautiful table that overlook the beautiful marina. We were all hidden and waiting for the final cue. Before their dessert, YC excused himself to the toilet. The final dessert with the words “Will You Marry Me?” was written with chocolate sauce and served to her. (With no YC in sight, she was surprised and started looking for him. But it was the guest server who returned and told her that the dessert was served to the wrong table, and took the dessert away. (Yes! YC was that cheeky.)

With that, we cued YC to return from the washroom. He saw the dessert being taken away. He then asked his love what happened and commented that if he were to propose, it would be with something much bigger. At the split moment, he points out of the window towards the Marina.

As she turns her head, gigantic balloons which spelt “Will You Marry Me?” floated up one by one. Before she could react, he led her up with a bouquet of red roses. Down one bended knee, he gave his heartfelt speech. “Yes…” She said shyly.

A cosy and simple proposal (with a little twist!), we were touched by YC’s efforts. His love for his wife-to-be prompted him to think up of an idea for a memorable proposal. We sincerely congratulate the both of them. Have a blessed marriage ahead! 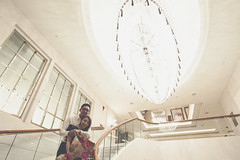 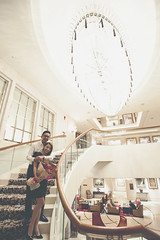 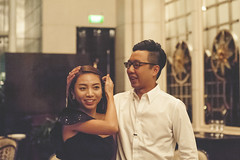